Whether a seasoned veteran or at the beginning of your fitness journey, you need a workout playlist to fuel your sessions. The right playlist will push you to do that extra set or to sprint that final minute. There are thousands of compilation albums and playlists out there for you to try but not just any will do - we wanted to create the best playlist out there so we used data to help.

DISCLAIMER: Many of the tracks that made it onto the final playlist contain explicit language which OriGym does not endorse. As such, please use your discretion, if music with explicit lyrics is not your thing then this playlist isn’t for you.

How did we create the best gym and workout playlist around? By investigating 5.7 million track entries within almost 30,000 Spotify playlists. 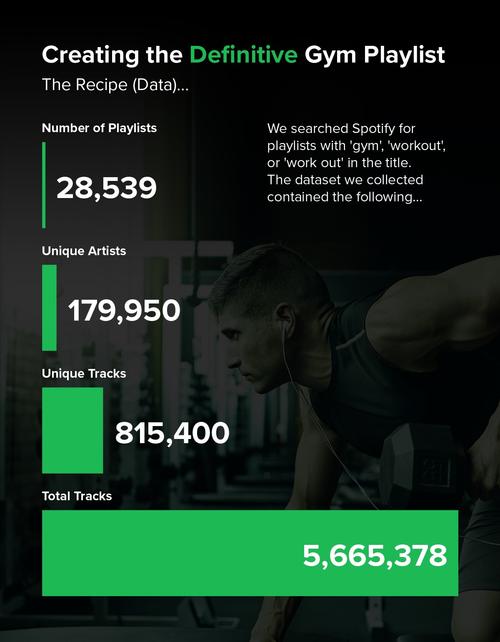 Research shows that the right music can help you get more out of your workout. A topic we've previously covered. But we don’t need research to tell us this, we just know it. Anyone who has tried to push themselves as far as they can go during a workout can attest that the right tunes pumping through your eardrums will provide that little something extra.

Whether it’s because we raise our effort to match the tempo of what we’re listening to, the music distracts our brains from the fatigue we might be feeling, or the lyrics themselves provide the motivation we need, the bottom line is that it helps...a lot.

To produce the definitive workout playlist we turned to the world’s most popular music streaming platform – Spotify. We collected tracklists for 28,539 playlists on Spotify that included “gym”, “workout”, or “work out” in the title. These playlists included a total of 5,665,378 tracks, of which 815,400 were unique.

For a track to earn the right to be added to our definitive workout playlist, it needed to rank in the top 100 most seen tracks of the ~5.7 million tracks in our database. Without further ado, here it is – the playlist you need for your next workout as decided by millions of users on Spotify.

It’s clear from looking at the playlist that hip-hop and rap dominate Spotify gym playlists. One song stands above the rest, the go-to song to power through the toughest parts of a workout – ‘Till I Collapse’ by Eminem and Nate Dogg from the Eminem Show album featured in a staggering 4,790 playlists. This means that ‘Till I Collapse’ is a part of 1 in every 6 gym/workout playlists on Spotify.

The following songs round out the top 10 workout tracks (number of playlists the song appeared on):

These tracks along with 90 more on the playlist will provide you with all the juice needed to maximise your efforts during your next gym session. With this workout playlist, you can say goodbye to frantically skipping songs when you’ve got 3 minutes to go on the treadmill and you need a heavy-hitter pumped straight into your eardrums to get over the hump – because every single song fits the bill.

Picture the scene; you look over at the weightlifting platform and you see a lifter pushing through pain to set their new personal best. Please don’t do this but if you were to go over and grab their headphones, what artist are you most likely to hear?

We know that the most popular song on workout playlists on Spotify – the song that took #1 on our top 100 – belongs to Eminem and Nate Dogg. However, the artist you would be most likely to hear is Drake. 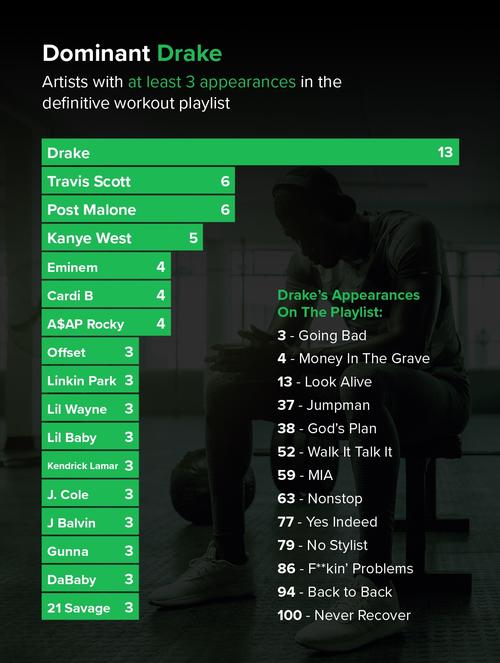 The definitive workout playlist includes 100 tracks and Drake features on 13 of these tracks. Perhaps it should come as no surprise that the Hotline Bling singer dominates workout playlists in 2020 as he’s arguably the most popular artist in the world and rap/hip-hop is the go-to for many people when it comes to fueling workouts.

Travis Scott and Post Malone also take up significant real estate on the definitive workout playlist with 6 entries each. Kanye West, Eminem, Cardi B, and A$AP Rocky join them as the only artists with more than 3 entries.

Exploring the playlist: the anatomy of a definitive workout track

Digging deeper into the data for the tracks that made the cut we found some interesting stats. Almost three-quarters (72%) of the tracks are potentially NSFW (not safe for work) or not suitable for playing at home during a family gathering as they contain explicit lyrics.

Spotify deploys algorithms to calculate properties of songs on the platform. Using these values we can see that – unsurprisingly– the tracks on the definitive workout playlist score highly for danceability and energy with an average score of 74% and 68% respectively.

The average BPM of these tracks is 123 which is on the slow side compared with the BPM that is often suggested to provide the optimum workout boost. This suggests that many gym-goers may be giving up a slight performance boost to listen to popular songs that they like outside of the gym rather than optimising based on science.

One of the interesting values that Spotify judges is “Valence” which is intended to measure how positive the lyrics to the song are. Interestingly, the average positivity score for the definitive workout playlist is exactly 50%. This means you’ll find songs on the playlist to flick to when you need some anger in the lyrics to push you on but also songs with a lighter tone for when that’s the required mood. 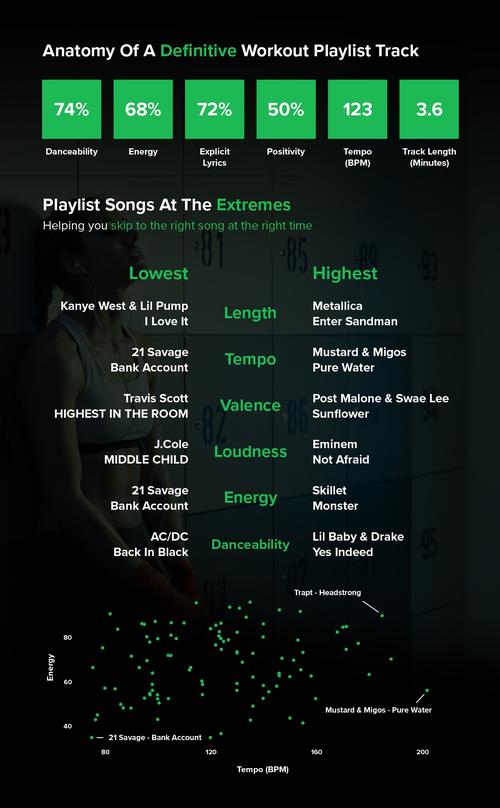 To help you pick out the right song from the playlist for the right moments during your workout we’ve listed the songs that score the lowest and highest for track length, tempo, valence, loudness, energy, and danceability.

When you look down at the display on the treadmill and you see you’ve got three and a half minutes to go, that’s when you might pull out our phone and skip to a specific track to get you over the line. By charting the songs by their energy and tempo scores we can highlight the tracks that stick out at the extremes for these important measures.

Above, we focus on the top 100 tracks in the dataset we collected – and rightly so – these 100 tracks are now cemented as certified workout bangers by earning entry on to our definitive workout playlist.

But what does our dataset say about gym and workout music more generally? Looking at the entire dataset, what can we learn about gym-goers listening habits?

Taking into account all tracks only asserts Drake’s dominance even more. Across the 28,539 playlists, Drake appears 123,599 times. This means that the average gym playlist on Spotify includes between 4 and 5 tracks featuring the Canadian star.

Here are the top 40 artists in workout and gym playlists on Spotify. 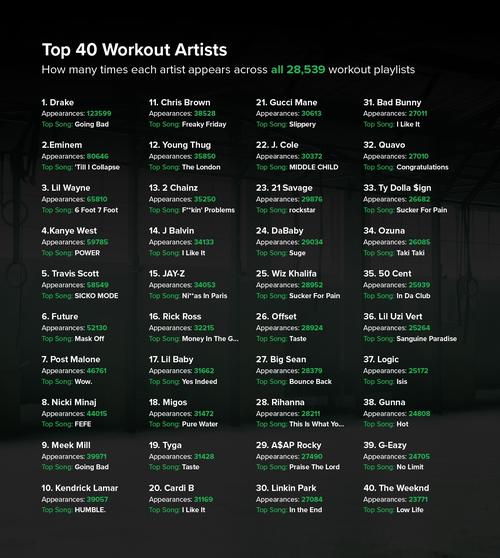 To understand just how popular Drake is on workout playlists we decided to have a little fun with it.

Due to the overwhelming dominance of the Hotline Bling star, we invented the Drake Factor (DF). An artist’s DF tells you how much more Drake appears in workout playlists than that artist. Drake is now the measuring stick for how workout suitable an artist’s catalogue is. 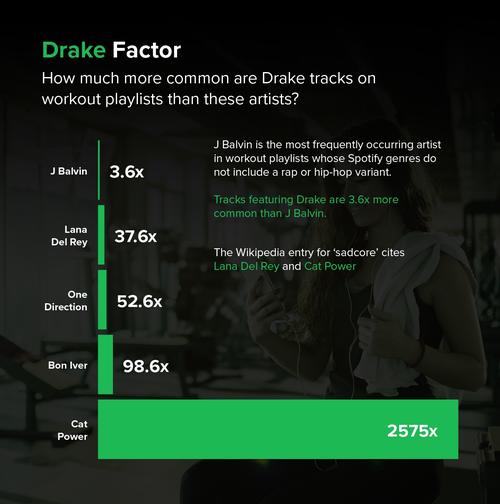 A quick view of the top tracks in the playlist and the top 40 artists suggests that rap and hip-hop genres dominate. Drake tracks are added to workout playlists 3.6x more than J Balvin – The artist that appears the most frequent that isn’t primarily a rap or hip-hop artist.

We also calculated the DF for some other interesting inclusions in workout playlists. One Direction clock in with a DF of 52.6 while Bon Iver scores 98.6. The Wikipedia page for 'sadcore' cites Lana Del Rey and Cat Power as examples of the genre. So we calculated the DF for these artists. Surprisingly, Lana Del Rey’s DF is 37.6 which means that Drake is only 37.6x more common than the ‘video games’ singer.

Genres for the gym

Some people like to get their pump on to a booming bassline while others prefer rhythmic rap to get them to the end of their set. Just how prevalent is each genre in the headphones of workout fiends worldwide?

To investigate this we took our database of almost 5.7 million track entries across 28,529 playlists and filtered it to unique track entries that appeared on at least 100 of the playlists. This gave 8,574 tracks that can be classed as bonafide workout tunes as decided by Spotify users (so more-or-less everyone!).

Spotify goes deep when specifying genres (sludgecore anyone?). Across the artists who produced these tracks, there are 730 unique genres according to Spotify. 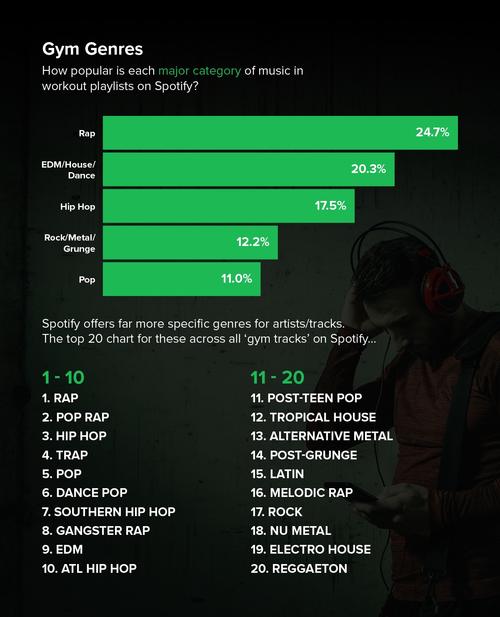 We found rap songs made up almost 25% of all tracks added to workout and gym playlists. The combination of rap and hip hop constitutes 42.2% of all tracks. Dance, house, and EDM tracks account for 1 in 5 workout tracks while rock and pure pop clock in at slightly over 10% each.

We set out to use data to produce the definitive workout playlist, a playlist that is essentially democratically selected rather than the opinion of the playlist creator. We did this by exploring the contents of almost 30,000 workout playlists that totalled 5.7 Million track entries. Only the 100 most popular tracks made the cut.

Are you looking for a fitness podcast that will give you some workout motivation? You’re in the right place. Fitness podcasts, running …
17 Top Fitness Motivation Videos: Get Inspired (2019)

Need a playlist to psych you up for that monster gym session ahead? If rap music is your thing, then this ultimate playlist of best rap work …

Are you looking for a fitness podcast that will give you some workout motivation? You’re in the right place. Fitness podcasts, running …
17 Top Fitness Motivation Videos: Get Inspired (2019)

Need a playlist to psych you up for that monster gym session ahead? If rap music is your thing, then this ultimate playlist of best rap work …