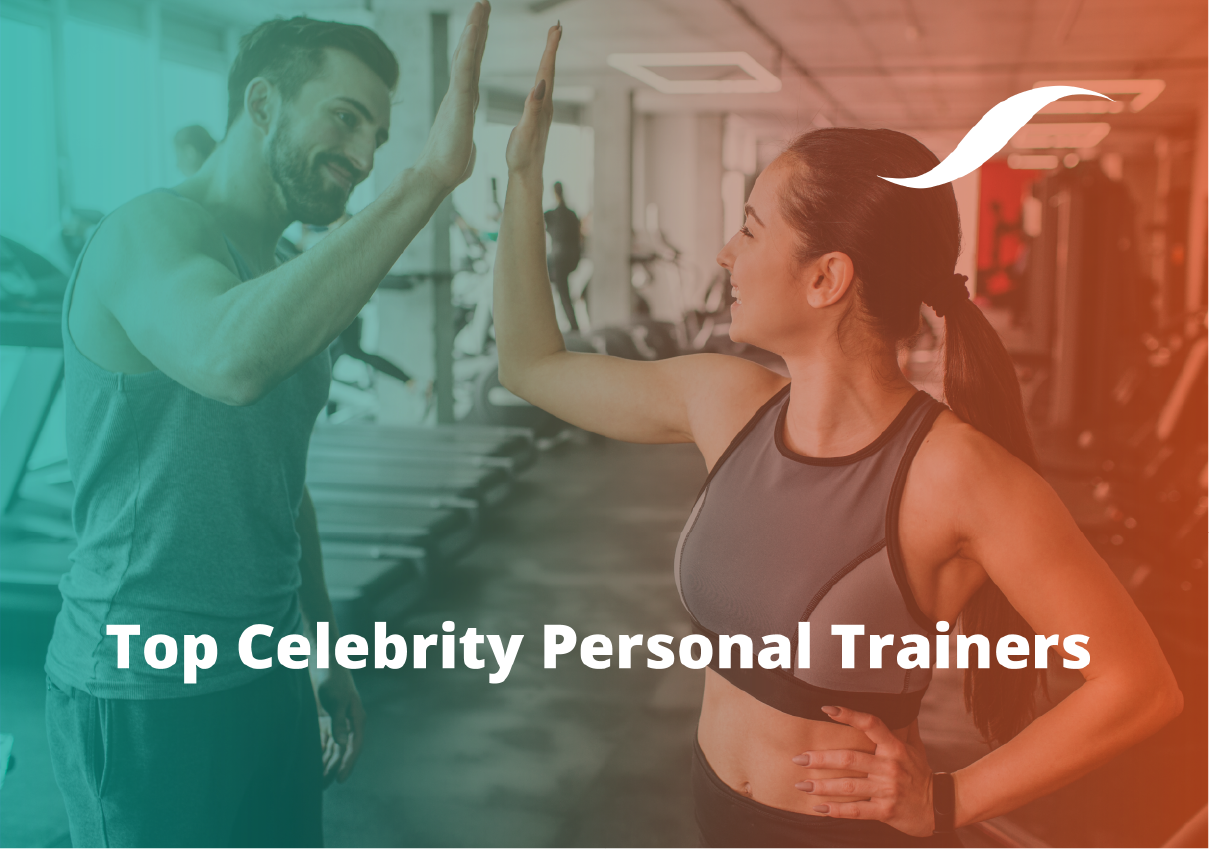 There's always room on the list of celebrity personal trainers, thanks to the ever-growing world of social media (and the popularity of the fitness industry).

We thought it would be a good idea to list 13 of the most famous personal trainers across the world, so that you could get some inspiration to create fitness content of your own!

Want to kick-start your fitness career? If so, go take a look at our range of fitness courses before you carry on reading...

Ross Dickerson was born in Texas, USA, before moving to London. Initially, he was unsure of what he wanted to do in life, but then he discovered the gym.

It wasn’t long before he was working out regularly, as he was inspired by other people getting into great shape and determined to have a physique that he could be proud of.

He now boasts 1.4m followers on Instagram, which classes him as one of the top celebrity personal trainers in terms of expertise as well as online following!

Gelband is renowned for working specifically with women clients, often focusing on clients with aspirations to be a model (his clients often work for institutions like Victoria’s Secret, among others).

He’s been dubbed the model whisperer by the New York Times, because of his expertise in training models to be in the best shape possible for their careers.

Gelband uploads video training exercises to platforms like Instagram, showing audiences some of his techniques and increasing his status and prestige as a PT.

Nick Mitchell is the founder of UP Fitness, which is a highly successful fitness startup that began in Manchester. UP Fitness personal training studios are incredibly popular across the globe, and are the home of many successful PTs.

Going from being a PT and a competitive physique athlete to the CEO of a major fitness brand is pretty impressive and certainly qualifies you to join the ranks of celebrity personal trainers in the UK!

If you are an avid follower of social media, then you’ve more than likely come across any number of meme comparisons, showing how The Rock looked before and after he was trained by Aaron Williamson.

Aaron’s website holds a number of varying online programs and Skype calls that clients can purchase to receive more advice from his team of professionals. His business ever-growing, and has no doubt been aided by the fact that he is one of the top personal trainers with celebrity clients like The Rock!

Alexia Clark caters to all kinds of fitness levels, which tends to appeal to a wider audience. Her 1.9m Instagram followers certainly suggests that she's part of the celebrity personal trainers clan!

Scrolling through her feed, you’ll find that she tries to switch up her routines, using a large variety of equipment. Think about the most unusual exercises you have seen… Alexia Clark has probably posted about them already.

This combination of accessibility and unique training methods has made Alexia a huge hit with online audiences, and we'd definitely suggest checking out her Insta if you're looking for something different!

Jeanette Jenkins boasts an unreal client list. She doesn’t only work with NFL and NBA stars, but also with professional gymnasts and a host of celebrities.

Impressive, right? No wonder she’s dubbed the “Hollywood Trainer”... now that's a celebrity personal trainers status to be proud of!

Don’t sweat it though, you don’t have to be a member of Hollywood’s elite to follow her workouts. Jeanette puts real effort into her social media posts, and always makes sure that there is a routine for everyone, available either through her website or following her Instagram.

He's the director of City Athletic, a performance training gym based in London, a 2x WBFF World Fitness Champion, and is incredibly popular on social media platforms, listing him as one of the most famous personal trainers in the UK.

He posts a whole host of fitness content and has worked with a number of athletes during their competition preparation. One of his clients includes Mike Worsley, who started training with Shaun after he finished playing international rugby!

You want to check out some celebrity PT’s online and see what they’re all about… But you’re a no-nonsense kind of person.

Fear not, Jamie Alderton is the guy for you! His straight-talking personality and intense workouts have garnered him a large and dedicated following in the fitness industry.

If you want some immediate-impact inspiration, we'd strongly recommend checking out his Instagram page, which has aided him in becoming one of the top celebrity personal trainers in the UK!

With an impressive 558K followers on Instagram, there's nothing stopping Mary Helen Bowers from taking the lead as one of the best celebrity personal trainers in existence.

She is the PT who trained Natalie Portman for her role in the 'Black Swan' film, after all. Not only this, but she has also trained the likes of Kirsten Dunst, Helena Christensen and Zooey Deschanel, which is impressive to say the least...

Bowers is the founder of Ballet Beautiful, a 'ballet-inspired fitness method and lifestyle brand'. They're incredibly unique, and seem to have created something brand new in the fitness world for those looking to increase strength and flexibility.

Are you a fan of the NFL? If so, you'll be interested to know that Gunnar Peterson is the director of strength and endurance training for the LA Lakers. Exciting, right?

Want some serious inspiration from one of the most well-known and top celebrity personal trainers out there? You need to see his Instagram page!

Ever heard of the 4X4 Diet? Oprea is the brains behind this diet book, which aims to get you your dream body in a realistic and sustainable way. It focuses on a balanced diet that allows readers to have cheat meals and processed foods in moderation, as Oprea herself believes that cutting these things out completely is unsustainable in the long run!

Aside from her fitness book release, Oprea has had her fair share of celebrity clients. These include Carrie Underwood, Kelsea Ballerini and Ryan Hurd.

One of the most famous celebrity personal trainers out there, Pasternak is multi-talented and incredibly inspirational.

He is a best-selling author of multiple health and nutrition books, holds a master's degree in Exercise Physiology and Nutritional Sciences (from the University of Toronto) and even served as a Nutrition and Exercise Scientist during his studies.

Sporting 464k followers online and being the founder of the 'Tracy Anderson Method', Anderson is one of the best celebrity personal trainers in terms of having a well-rounded career.

She has trained the likes of Victoria Beckham, Robert Downey Jr, Jennifer Lopez, Nicole Richie, and many more!

As well as this, she has also released exercise DVDs, started an online fitness business with her 'Online Studio', and even released her own fitness apparel line that she sells on her website.

That's it for our list of the top celebrity personal trainers out there!

Celeb personal trainers and fitness personalities prove that there are no heights when it comes to establishing your business. The truth is, anyone can achieve success when they put their heart and soul into what they do. As long as you are creative, take (the right) risks, and work hard, there's nothing stopping you from joining this list yourself!

Interested in starting your own fitness career? Go check out our Level 3 personal trainer certifications, or download our FREE prospectus for more info on what you could be learning!

Want to get in shape, but your fitness Instagram feed is filled with gin and junk food?Good news, we’ve got the 57 best fitness In …
How To Become A Personal Trainer: The Essential 5 Step Plan To A Successful Fitness Career

Today I’m going to show you exactly how to become a personal trainer (UK). What’s more, I’ll be walking you through how …
Best Personal Trainers: UK (Definitive List 2019)

Being a personal trainer can be a rewarding job, helping people with their goals in the short and long term but what does it take to be …

Want to get in shape, but your fitness Instagram feed is filled with gin and junk food?Good news, we’ve got the 57 best fitness In …
How To Become A Personal Trainer: The Essential 5 Step Plan To A Successful Fitness Career

Today I’m going to show you exactly how to become a personal trainer (UK). What’s more, I’ll be walking you through how …
Best Personal Trainers: UK (Definitive List 2019)

Being a personal trainer can be a rewarding job, helping people with their goals in the short and long term but what does it take to be …
This site uses cookies and will place cookies on your device. By continuing to use this website we assume you agree with our use of cookies and our cookie policy.