In light of the latest Government restrictions forcing gyms all over England to close yet again, the conversation around the benefits of gyms for mental well-being continues.

Whilst individuals can exercise outdoors or at home, fitness professionals and gym-goers alike are still campaigning for gyms to remain open as an ‘essential service’ during the new national lockdown.

The benefits of exercise for mental well-being, such as reduced anxiety and depression, are undeniable. However, some individuals are sceptical about whether the relationship between exercise and mental health is dependent on gyms being open.

Acknowledging that academic research studies have continuously determined a positive relationship between exercise such as running, cycling, and even walking, and improved mental well-being, there is some substance in the argument that gym-based training is not an essential aspect of the battle against mental health.

However, many gym-goers and owners believe otherwise. So much so, that the October petition for gyms to remain open regardless of the coronavirus restrictions received a huge 619,941 signatures.

Whilst weight-training was once an activity reserved for those wanting to bulk up and build serious muscle mass, strength training is now hugely popular among individuals of varying ages, genders, and abilities.

According to Vanessa Gebhardt, a Mind Coach at Freeletics, ‘there is a strong connection between being physically and mentally strong’. She explained:

“More and more people are discovering that lifting heavy not only improves their health but also their self-confidence and the way they perceive their body. Building strength and toning your body can translate into feelings of being mentally strong and able, which in turn boosts self-esteem.

Furthermore, there is academic research to support claims that there are benefits of strength training that can not be achieved with cardiovascular exercise alone.

A study by Trujillo investigated the effects of various kinds of exercise on self-esteem in college-aged women. The study split participants into three groups: weight-training, running, and a control group.

As you might expect, the results showed that the self-esteem scores of those in the weight-training group improved significantly compared to the control group. 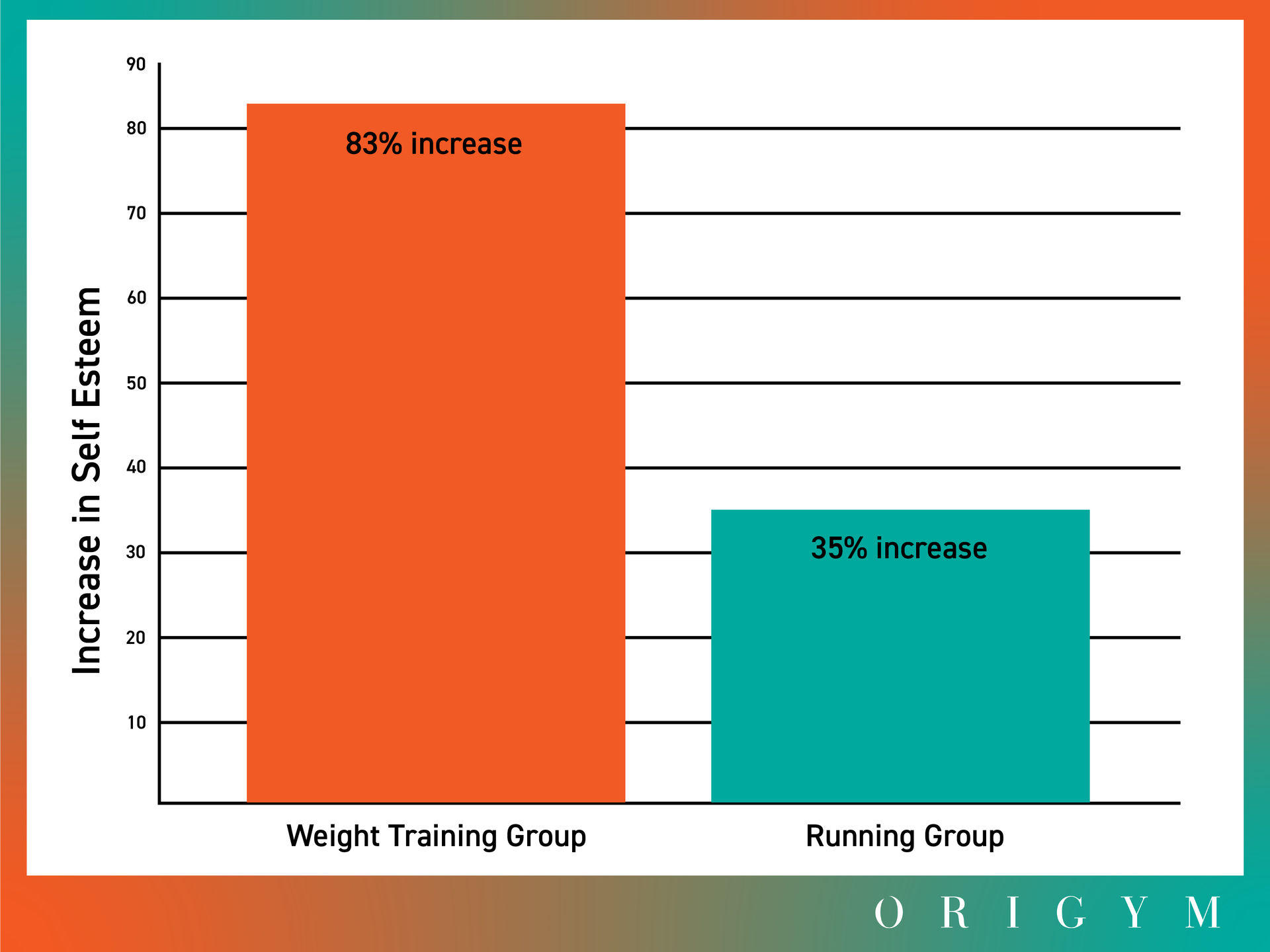 A more recent study published on the National Library of Medicine produced similar findings. The 2020 study showed that whilst both cardiovascular training and weight training can each benefit mental well-being independently, the lowest prevalence of depression was seen among participants who combined both.

“A physical activity routine that includes both aerobic and MSA (muscle-strengthening activity) is likely to be optimal for the prevention of depression.”

Plus, a review article produced by academics at the University of Georgia found an overwhelming amount of evidence from academic studies suggesting that strength-training specifically was associated with multiple indicators of improved mental health. 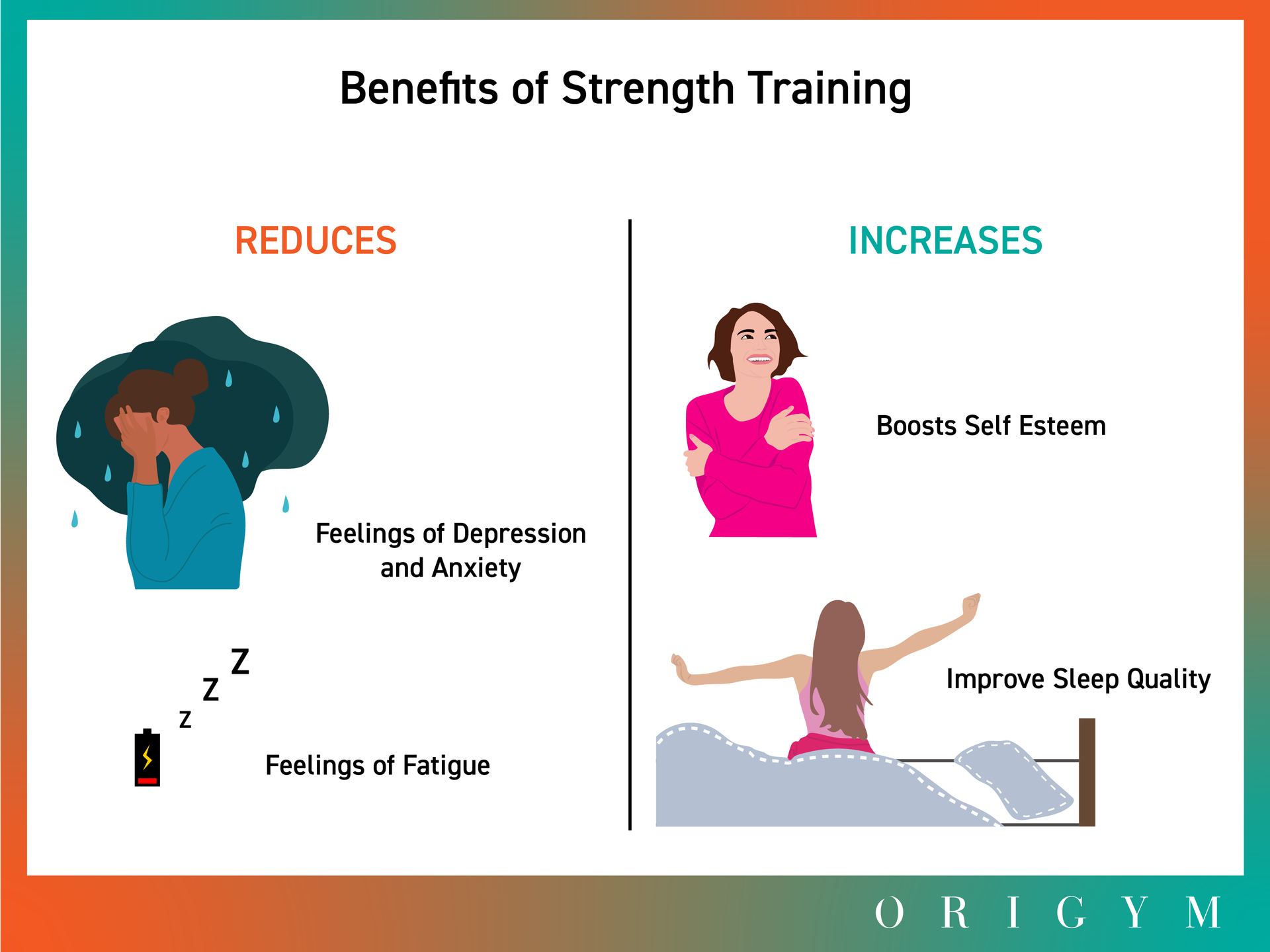 Those included reduced feelings of anxiety, reduced symptoms of depression in individuals diagnosed with clinical depression, improved quality of sleep among depressed adults, and improved self-esteem among participants of varying demographics.

44% of people suggested strength-training boosted self-esteem more than any other kind of exercise.

In a survey conducted by OriGym, we asked participants ‘which kind of exercise do you find boosts your self-esteem most significantly?’. Participants were able to choose from the following 4 options: cardiovascular exercise, strength-training, hypertrophy, and muscular endurance. 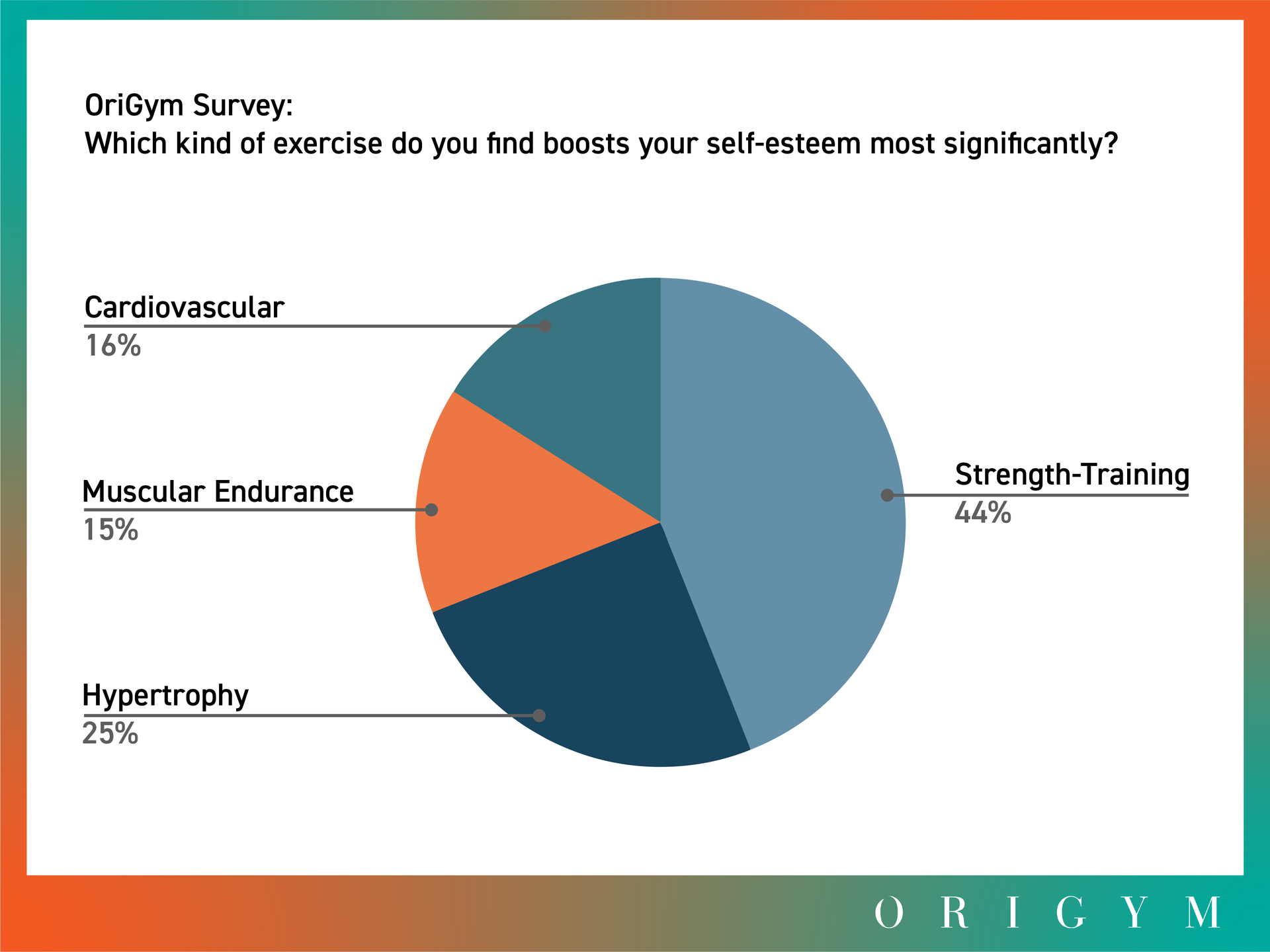 The results of the survey showed that 44% (131 out of 298) believed strength-training was the most effective form of exercise for increasing feelings of confidence and self-esteem.

Considering the findings of research by mental health charities such as Mind, which found that most people felt their mental health had gotten worse since the first lockdown, efforts to improve mental well-being should be taken seriously.

Here are some startling figures from Mind’s investigation titled ‘The Mental Health Emergency’:

Although some form of resistance training could be carried out at home, anyone who regularly trains to build strength will tell you that working out at home or replacing strength sessions with an evening run, just doesn’t have the same effect.

And they’re not just saying this to be awkward.

In fact, an article by Better Health has suggested that the ‘feel-good’ effects of exercise are largely the result of a self-esteem boost associated with reaching or even just getting that little bit closer to an exercise goal.

This argument is backed up by goal-setting theory, a Psychological theory that suggests setting and achieving goals helps to build self-confidence, happiness, and motivation.

There’s no denying that lifting weights is empowering, it makes you feel and look stronger, and in turn boosts self-esteem and diminishes self-doubt.

But for somebody who is used to lifting heavy in the gym, switching out a barbell for a tin of beans (as one MP has suggested) just isn’t going to provide that same sense of achievement.

The amount of times you would need to bench press a tin of beans to mimic the benefits of a barbell doesn’t even bear thinking about. 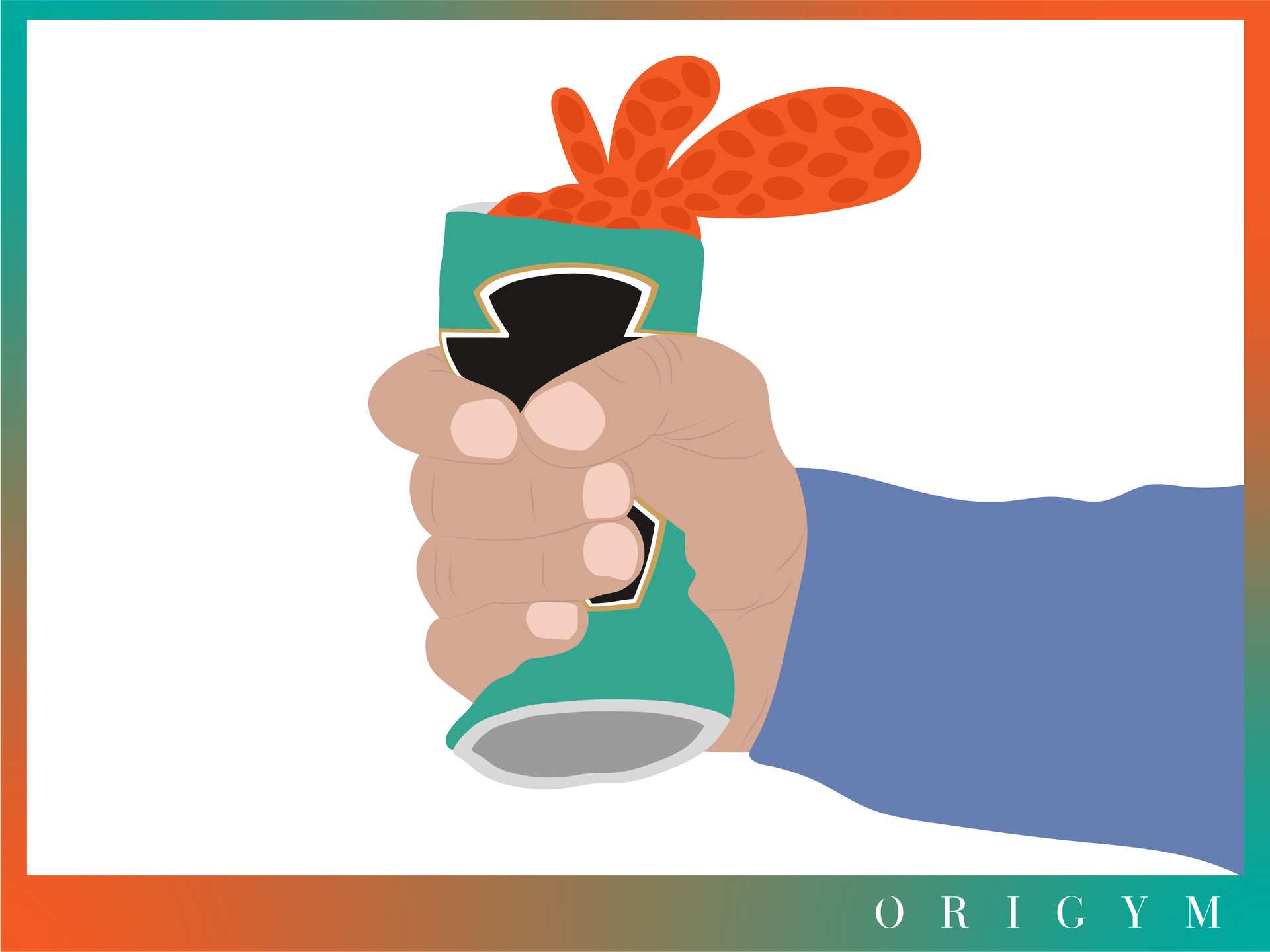 Plus, performing more than 1-5 reps within a set takes you out of the strength-training range, making it completely unrealistic, or better yet physically impossible, to achieve any strength-related goal by performing countless reps with household items.

Even heavier household items such as bags of potatoes or large bottles of water, just aren’t sufficient for those who train to build strength.

Increasing the number of reps performed to compensate for this lack of weight just isn’t a feasible option.

Simply put, doing more than 1-5 reps in a set is not strength-training, and performing any more than 12 reps per set completely switches the purpose of the exercise from building muscle and strength, to improving muscular endurance and cardiovascular fitness.

For that reason, advocates for gyms to remain open regardless of the coronavirus restrictions are right in arguing that it is impossible to replicate strength-training and its benefits in a household environment.

The final solution? ‘Buy your own equipment’.

Considering gyms in England have been closed on and off for the last 9 months, it might not seem unrealistic to suggest that those who believe strength training is imperative for their mental well-being, should buy their own kit.

However, this is yet another point that has clearly come from somebody who isn’t familiar with this kind of training or in touch with the reality of many peoples current financial situation.

Not only would it be pretty expensive to set up a home gym under normal circumstances, but the pandemic has plunged the world into an economic crisis. 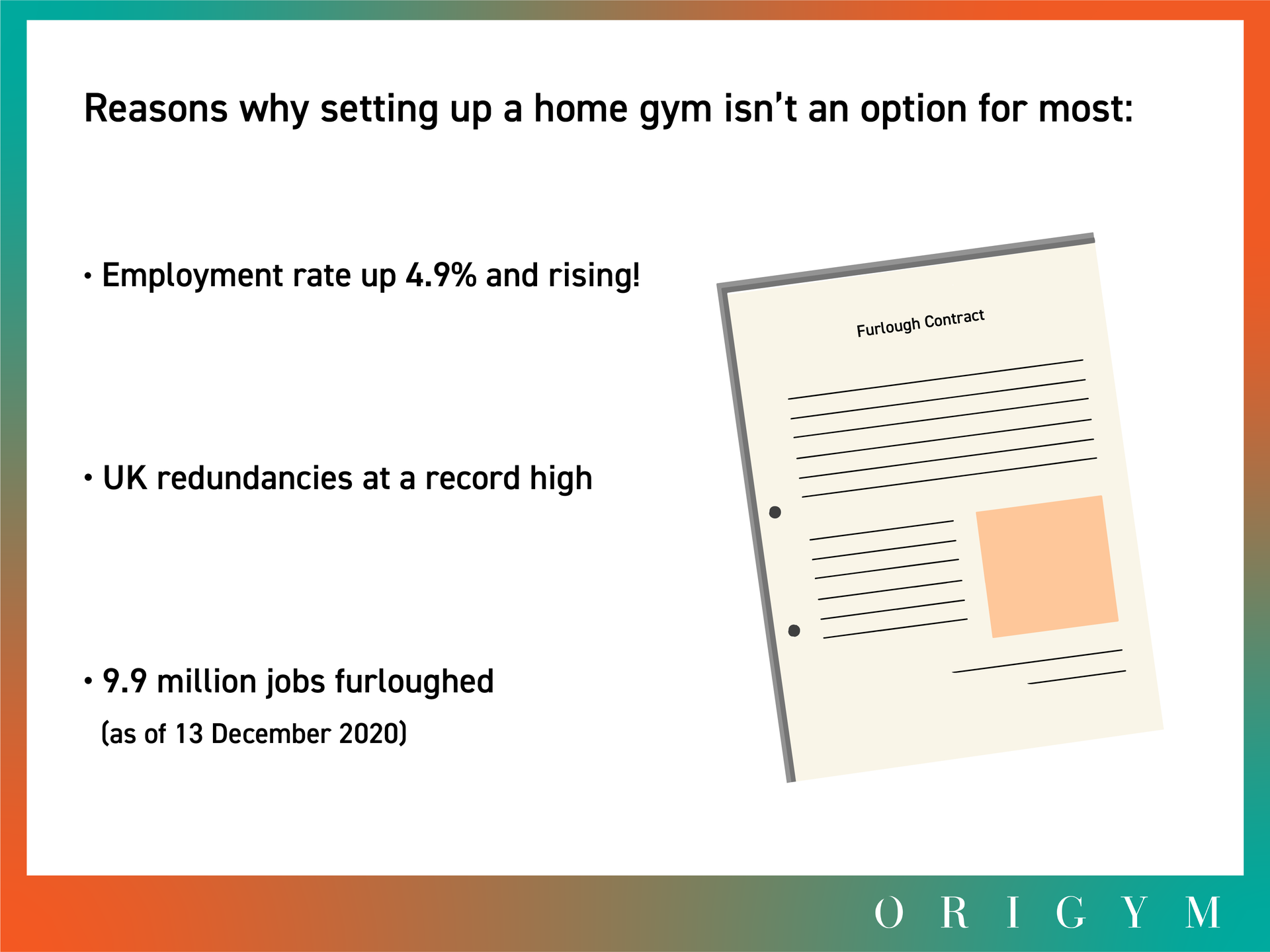 In the UK, the latest figures showed that the employment rate was up to 4.9%, and rising, meanwhile reduncies in the UK hit a record high in the period between August and October 2020.

Of those who are employed, a huge 9.9 million jobs were furloughed as of 13 December 2020, meaning a huge percentage of the working population have taken a cut to their income (according to HM Revenue & Customs statistics).

For that reason, it's more unrealistic than ever that people will be able to afford to set up a functioning gym in their homes.

Even among those who have been fortunate enough to avoid the negative financial implications of the pandemic, it’s pretty unlikely that people will have the space to set up a functioning gym at home.

In the few instances where individuals have the money and space to set up these facilities, strength-training at home isn’t necessarily the safest of practices.

Realistically, when performing exercises with free weights, especially the likes of a bench press which involves actually getting under a weight, having a spotter is pretty important!

Although training with friends or a PT in a gym is understandably limited by social distancing measures, knowing that a trained professional is in the gym to help if you do find yourself stuck at the bottom of a squat, is always reassuring.

It shouldn’t even need to be said that exercising in the presence of qualified staff is a much safer, more sensible way to workout.

It’s clear to see that for those people who regularly take part in strength-training, this type of exercise specifically has unique benefits that just cannot be replicated at home.

Whilst there is no doubt that having social distancing measures in place is imperative, opening covid secure gyms is essential in order for individuals to train in a way that is effective, beneficial, and safe.

Holding an MA Marketing Communications and Branding as well as a BSc Psychology from the University of Liverpool, Abbie’s experience encompasses the retail, hospitality and fitness industries. Since joining OriGym, she has become a qualified Personal Trainer and gone on to complete a specialist qualification in advanced Sports Nutrition. Abbie’s main focuses cover staying up to speed with YouTube fitness influencers, identifying successful and innovative content formats. She has contributed to various publications, including the Daily Express. Beyond OriGym, she describes herself as a ‘work-hard, play-hard’ type going on scenic runs and upbeat exercise classes, and often found on the front row of a Saturday morning spin class.

If you’re looking to start a career in Strength and Conditioning, it’s a good idea to assess the potential career prospects avai …
How To Become A Personal Trainer: The Essential 5 Step Plan To A Successful Fitness Career

Today we’re going to show you exactly how to become a personal trainer in the UK. Just below, you’ll find our full guide …
Gyms forced to close in third national lockdown

All gyms have once again been instructed to close as the country enters a third national lockdown. Following PM Boris Johnson’s …

If you’re looking to start a career in Strength and Conditioning, it’s a good idea to assess the potential career prospects avai …
How To Become A Personal Trainer: The Essential 5 Step Plan To A Successful Fitness Career

Today we’re going to show you exactly how to become a personal trainer in the UK. Just below, you’ll find our full guide …
Gyms forced to close in third national lockdown

All gyms have once again been instructed to close as the country enters a third national lockdown. Following PM Boris Johnson’s …