In the past 12 months, searches for ‘women’s-only gyms’ have increased 69%. The gym should be a safe place for all, without fear of intimidation, sexual harassment or embarrassment. So why are people desperately looking for women’s gyms?

To find out, we surveyed over 1,000 gym-goers of all genders about their experiences in the gym to create the ‘Gym-timidation Report’.

The results reveal how many women have felt uncomfortable in the gym. The report also details the most common types of harassment for women, transgender, non-binary and gender fluid people; as well as what methods are used to avoid feeling uncomfortable, the things men can do to make people feel safer in the gym and more. 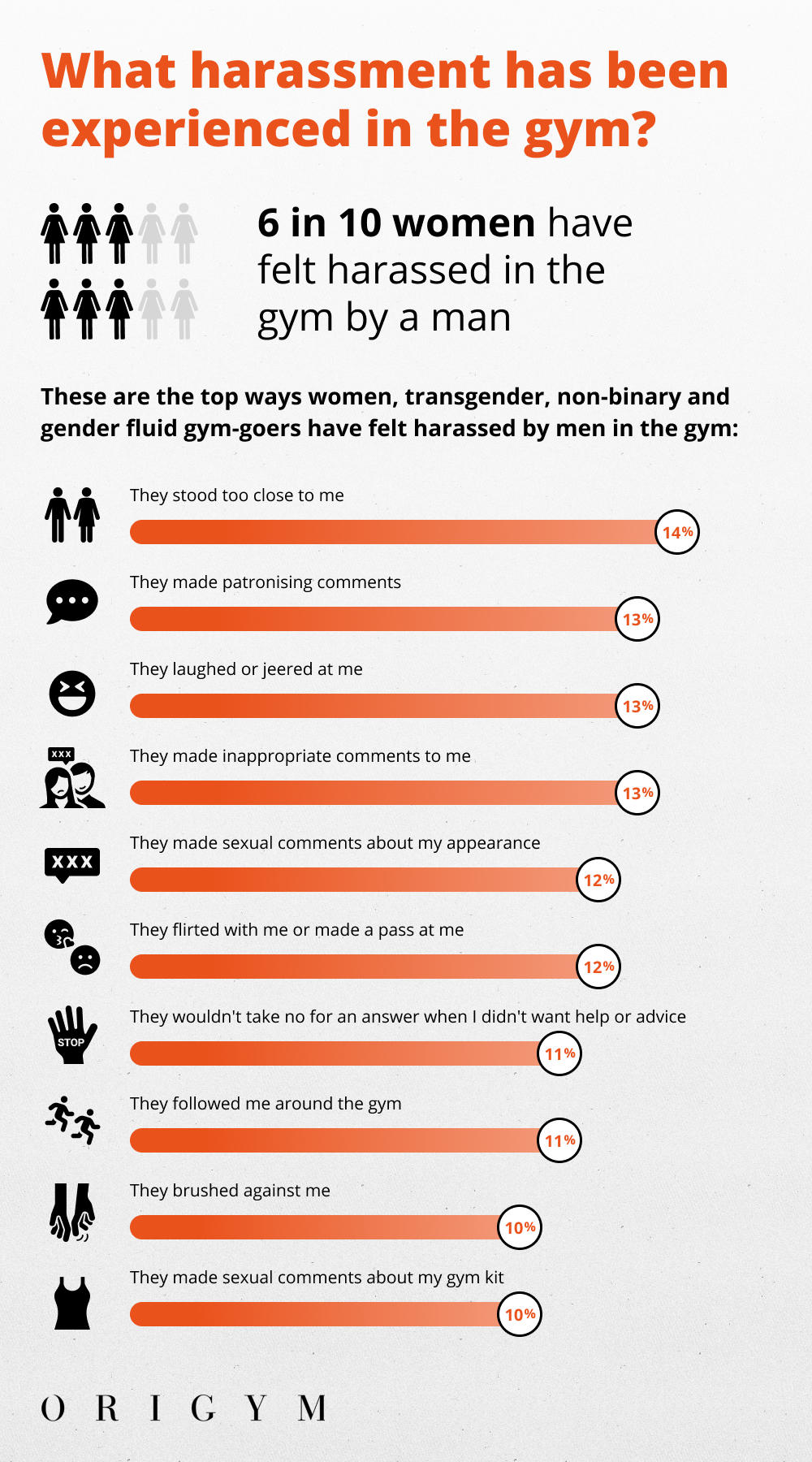 Respondents could give multiple answers, to highlight all the types of harassment they have experienced.

Even for regular gym-goers, working out at the gym can be tough to bear.

Over 61% of women admitted to having felt harassed at least once in the gym by a man. At the gym, women want to simply exercise and relax, so unwanted advances, flirting and sexual or patronising comments make for a highly uncomfortable experience.

For working out to be the positive experience it should be, many must overcome “gym-timidation”. The results of the Origym survey reveal widespread sexual harassment in the gym, with women citing encounters of men making a pass at them, inappropriate comments and sexual remarks as some of the most common gym harassment.

In reviewing the responses, it appears that sexual harassment is not just categorised as physical threat. While physical actions are still highly prevalent, verbal intimidation is also a common theme and these make women feel just as uncomfortable as physical intimidation.

It’s clear from this, that unwanted behaviour - whether the intention is compassionate or complimentary - isn’t justifiable if it’s perceived as harassment by women.

The report establishes that ‘gym-timidation’ is a very real concern for women, with many taking necessary precautions to avoid putting themselves in uncomfortable and inappropriate situations.

Women having to shun the gym or change their behaviour should never be the answer.

However, 2 in 5 women have made the decision to avoid the gym altogether because men have made them feel uncomfortable there. It’s a stark reality that women could end up getting less exercise due to avoidable gym intimidation.

Women feel the need to adapt how they behave following negative encounters, with nearly half wanting a friend or partner to work out with them because men make them feel uncomfortable.

Similarly, for those that do still exercise in the gym, there are certain areas they avoid due to feeling uncomfortable.

28% of women gym-goers who mostly avoid the resistance area cite the reason as ‘it’s mostly men in there’ and 18% admitted to men making them feel uncomfortable there.

Crossing the divide into the male dominated spaces appears to be highly intimidating, and some feel comfortable in different areas of the gym.

The following were the most popular answers to ‘What, if anything, could a man do in the gym that would make you feel uncomfortable?’:

Making someone feel uncomfortable isn’t always as obvious as inappropriate touching - it could look like any of these things above. It could be appearing like you’re taking unsolicited pictures, staring, lingering around equipment, not taking no for an answer, whispering and much more.

Be an ally: what men can do to make people feel safer in the gym

Despite 2 in 5 women feeling they need to avoid the gym so they aren’t made to feel uncomfortable by men, it’s not women’s responsibility to change their behaviour. Therefore, we asked women, transgender, non-binary and gender fluid people what men can do to make them feel safer in the gym.

When men are in the gym, it’s impossible to tell the intentions of their actions. What may seem friendly, sociable or non-threatening to an innocent man, could feel very different to women, or transgender, non-binary and gender fluid people.

Men who attend the gym can follow these pointers and support others when it comes to making them feel safe. 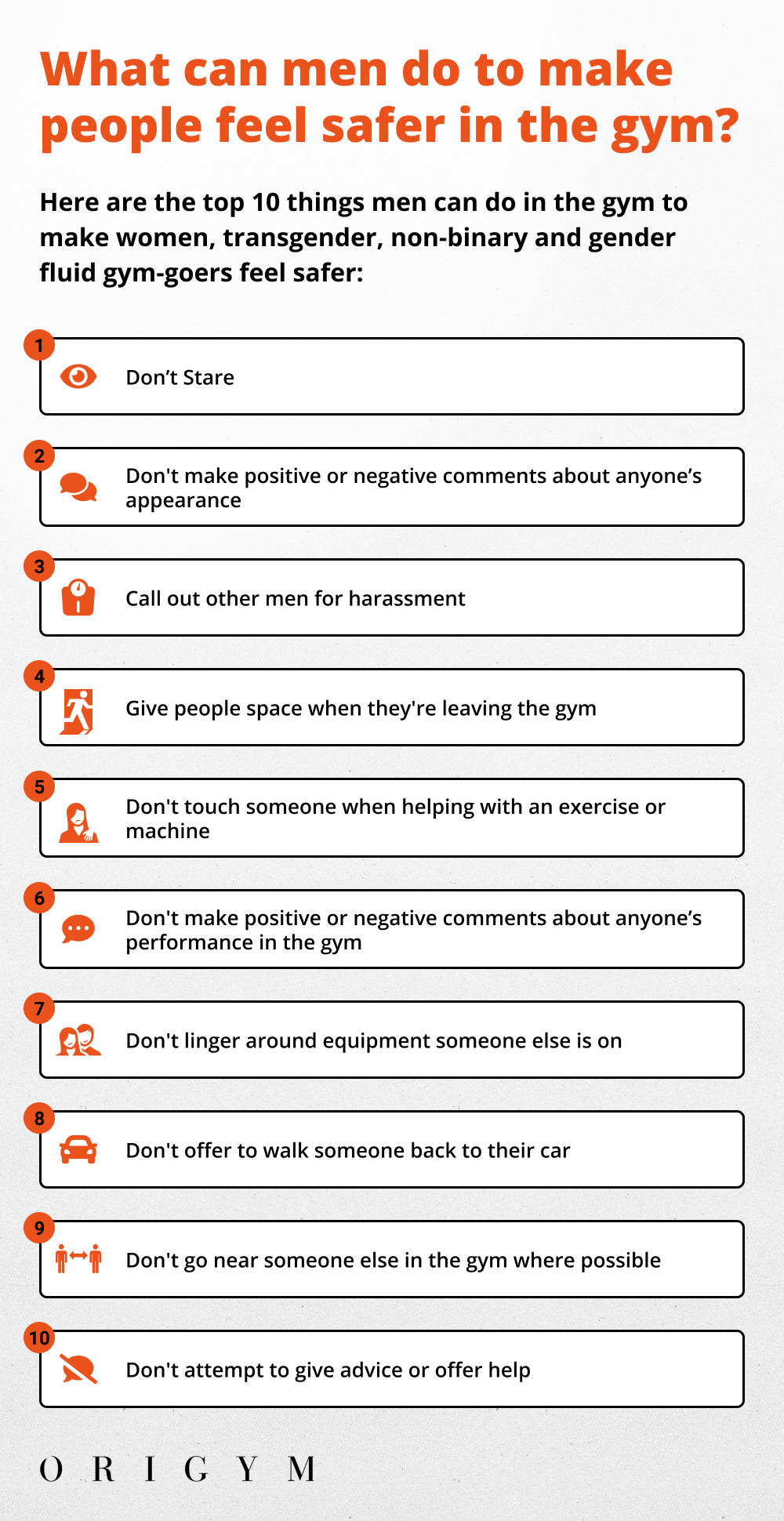 Men can play a vital role in preventing gym-timidation

Men can actually play a huge part in intervening and preventing the discomforting situations from happening in the first place.

By following what women, transgender, non-binary and gender fluid say makes them feel safer, men can help to significantly reduce or remove gym intimidation altogether. By ensuring the circumstances that cause discomfort don’t occur, men are respecting that it isn’t all down to women to change or avoid the environment making them feel unsafe.

With ‘women’s-only gyms’ searches increasing 69%, this report reveals further evidence that women’s gyms are needed more now than ever before.

Of the women asked, 31% said they would see a benefit to women's-only gyms so that women can feel safer and more comfortable. Similarly, 38% of women would see benefit to at least a women’s-only section of the gym.

While this isn’t necessarily a new phenomenon, women's gyms have been receiving a lot of attention on TikTok recently, with the hashtag #WomensOnlyGym at 21 million views, and counting.

It’s no surprise that a significant number of women want to work out where only women are allowed after a huge influx of women sharing their experiences of sexual harassment in the gym.

Personal trainer Heidi Aragon was recently featured across the UK press for her response to gym harassment. Heidi caught an older man repeatedly staring at her as she worked out, and was forced to call her husband over and stand next to her in a bid to block him (highlighting further why nearly half of women want to go to the gym with their partner). She ended up confronting him and exposing him on Tik Tok:

Chelsie Gleason’s experience was also recently reported in the press, with her Tik Tok documented gym harassment leading to many female gym-goers calling for a safe space for women. The video of the man who she’d never met but had been harassing her for months has racked up more than 47 million views and many praised how she dealt with the situation.

being a female is fun(:

This 17-year-old girl shared her experience on TikTok when she had to stop working out and was left shaking after a man followed and stared at her during her whole workout:

Women’s gyms are most wanted in Brighton and Manchester

Over half (53%) of gym-goers in Brighton see a benefit to women’s-only gyms, so that women can feel more comfortable and safer. This is closely followed by 43% of Manchester gym-goers and 41% in Southampton.

Women are 7 times more likely to specify they want a female PT, than a male PT

While 50% of men and 55% women don’t mind what gender their personal trainer is, others have a preference for the gender of their PT.

For women who specify they’d want a female personal trainer, we asked them to explain why, these are just a few of the responses:

Another 2021 study from Origym found that in the last five years, the UK has seen a 17% increase in women becoming qualified as personal trainers. The results showed a year-on-year increase in the number of female students enrolling into personal training courses, with the ratio gap of men to women consistently minimising.

The study provides evidence to suggest that the fitness industry is becoming more gender inclusive, at least from a professional standard, and by the current trend is forecasted to see an equal split between genders within the next few years.

If you are a woman interested in contributing to the change, or simply someone with a passion for changing the lives of others, then contact OriGym Centre of Excellence to enquire about our Personal Training courses.

Fancy learning more about becoming a Personal Trainer?  Book a call with one of our career advisors on 0800 002 9599, who will take you through the options and answer any questions you have or download our free course prospectus to find a course that best suits you.

We surveyed 1,013 gym-goers using Censuswide, to find out their experiences and opinions in the gym. The sample included women, men, transgender, non-binary and gender fluid people (and an ‘other’ option to specify a different gender not listed). They ranged between 16 and 55+ from across the UK.

We used SEOmonitor's trends tool to show +69% ‘women’s only gym’ searches, when comparing September 2021 vs. September 2020.

If you want to share our study, any findings or images from the study, please credit with a link to this page.